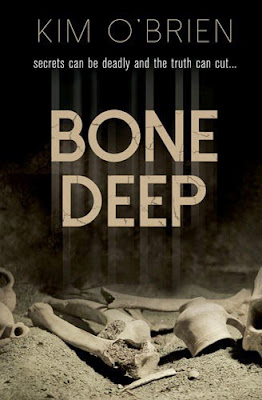 
A note from Kim:

I chose this passage because it’s kind of creepy and I love the idea that people who have passed can come to us in dreams, communicating through our subconscious. When I was about twelve, my best friend’s mother had a brain aneurism and was taken to the hospital. I was very shy, very quiet around adults. So my friend’s mom and I looked at each other more than we talked. A couple of days after she’d gone to the hospital, I woke up and in the middle of the night and saw her face floating in the corner of my bedroom, near the ceiling. It was just her head, nothing else, and it glowed as if it were lit from within. The next morning, I found out she had died the night before. I never saw her image again.

In my bed, I lie with the covers pulled high looking up at the ceiling. Although

I’ve been trying for hours, I can’t sleep. The room feels cold, much colder than usual— as if the thermostat is set to about fifty degrees.

I flip over. It’s just after two o’clock in the morning. I’m so tired my hands tingle, but I can’t sleep, not when Emily’s missing. I wonder if the police have Jeremy in custody. If they’ve found Emily. Another chill goes through me, and I tuck the quilt more tightly around my shoulders.

I’m thinking of getting up and putting on a pair of sweats when my door creaks and Emily walks into the room.

In the moonlight, her hair looks disheveled. Half her face is in shadow, but as she nears, I see it’s not the lack of light, but dust coating her left cheekbone.

“Paige!” She hurries to the edge of my bed. Her long pale hair falls forward as she leans over me. “I’ve been trying to get in touch with you.”

“Where were you?” I study every inch of her. She’s very pale, and there are small chunks of something plaster-like dangling in the strands of her hair.

“I got lost,” she states, a little sadly. “I’ve been walking for a while.” She looks down at her feet. “I lost my sneakers. Isn’t that funny, Paige? They disappeared when I was sleeping. I just woke up, and they were gone. Have you seen them?”

“They’re not important,” I assure her. “What matters is that you’re back and you’re okay. What happened to you?”

Her face wrinkles. “I don’t know.” Her eyes move to the top left corner of their sockets, as if she’s thinking really hard. After a moment, she shakes her head. “I can’t remember.”

“Were you in a car accident?”

“I don’t think so.” She feels the back of her head with her hands and then grimaces. “God, my head hurts.”

Throwing my covers off, I swing my legs over the side of the bed. Emily stands very still as I throw my arms around her. “Stop trying to remember. It doesn’t matter what happened. I’m just so happy to see you.”

She smells strongly of roses, as if she has doused herself in perfume. It’s so unlike her that it takes my mind a second to register that her body is stone-cold in my arms and her skin feels hard and smooth as polished marble.

Stunned, I pull back far enough to look into her face. Only instead of Emily, she morphs into my mother, who leans over me, the strap of her silk nightgown slipping from her pale shoulder, her eyes black and angry.

My alarm goes off, and I jolt upright. Heart pounding, I fumble for the off button and switch on the lamp. The room is empty, and it’s 2:13 in the morning. I pick up the clock to reset the alarm and discover it’s already at set for six—my usual time. So why did it go off? The dream was about Emily. So why then did my mother say, you didn’t see him?


Add it on Goodreads

When Paige Patterson travels to Arizona to spend the summer with her archeologist father, she expects answers. Why did her parents divorce? Why did her father choose his career over family? She doesn't expect to be reunited with her best friend Emily Linton, a girl she has always admired and secretly wanted to emulate, or to find herself falling for the project manager's son, Jalen Yazzi.

But the summer takes a terrible turn when Emily vanishes. As the police struggle for answers, Paige sets out to find the truth.

The search takes Paige from the Cliffside ruins of prehistoric Native Americans to the Navajo Nation to the horrifying possibility that the answer is much closer to home. Emily, it turns out, was not the ony one good at hiding things.

Her father has no alibi for the night Emily disappeared. An intern with the motive insists he's innocent. And Jalen has some secrets of his own.

Old bones might not be the only things buried in the ruins. As Paige digs deeper into Emily's disappearance, she realizes that uncovering the truth may cost her everything - even her life.

Giveaway is open to US only.

Kim O'Brien grew up in an old Victorian house in Bronxville, NY. Her mother loved telling her bedtime stories, especially onees about the ghost in their attic. Kim not only believed the house was haunted but also fell in love with books and the art of storytelling.

At Emory University in Atlanta, Kim earned a B.A. in psychology. She then attained a M.F.A. in writing from Sarah Lawrence College in Bronxville, NY. She worked for many years as a writer, editor, and speechwriter for IBM before becoming a full time fiction writer. She lives in Texas with ehr husband, daughters, and four-legged friend Daisy.

Kim is the author of eight inspirational romances and seven non-fiction children's books. She loves to hear from her readers and can be found at www.kimobrienbooks.com, Facebook, and Twitter (kimobri).

Posted by Heather Helene at 8:00 AM